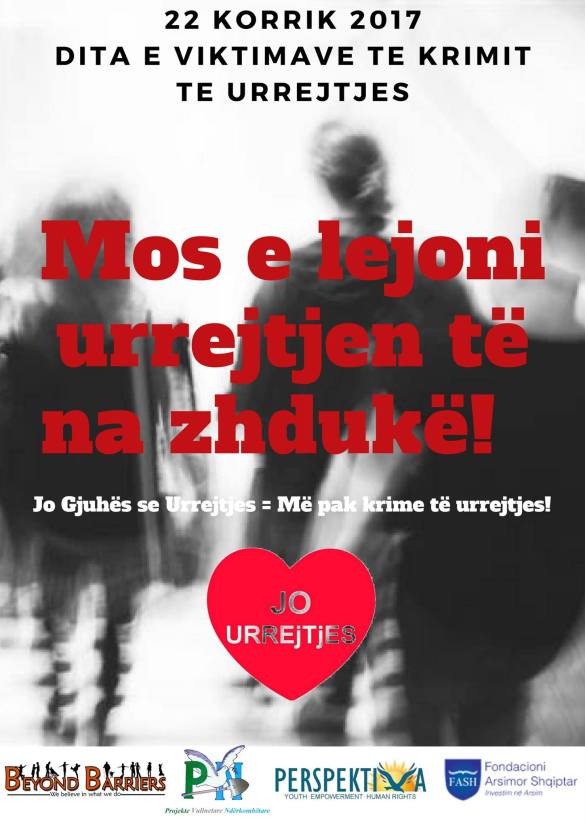 On 22 July 2017 in Tirana, Youth Center “PERSPEKTIVA”, in partnership with NGOs “Beyond Barriers”, “PVN Albania”, “FASH” (Fondacioni Arsimor Shqiptar) and cooperation with Olen Dashi, organized the workshop “Do Not Let Hate Blur Us Out!” (Albanian: “Mos e lejoni urrejtjen tё na zhdukё!”) to mark the European Day of Victims of Hate Crime.

The workshop was organized in support of the No Hate Speech Movement Action Day for Victims of Hate Crime that is commemorated on 22 July 2017. The activity gathered around 30 young people, including 4 French guests from the “Interfaith Tour”. The workshop went on for around 2 hours, due to the sensitivity and scope of the topic, and nature of intense discussions between participants.

The main objective of the workshop was to provide participants with general information about hate speech and its connection to hate crime, as well as their negative effects in the society. In the beginning of the workshop, we spoke about the tragedy that took lives of 69 young people on 22 July 2011 in Utøya. That attack became a breaking point in realizing devastating connection between hate speech and hate crime, which urged the Council of Europe to develop specific policies and initiatives to tackle the problem including the youth-led No Hate Speech Movement campaign. Many participants were not aware of the Utøya tragedy and were shocked by the fact that a lot of evidence of the planned attack was published online weeks prior to the massacre. We discussed why there was such a big need to have a campaign, which main focus would be to monitor, combat and prevent hate speech online and offline through human rights education and youth work. 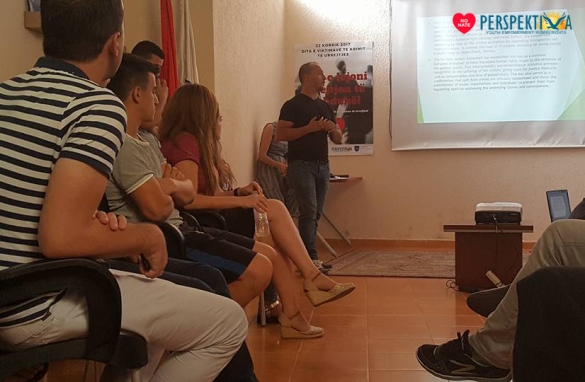 We continued the discussion with deconstructing hate crime. What defines the hate component in those crimes? How can hate crime evolve on social media? How spread is the phenomena in today’s Europe and which socio-political trends contribute to the scope of the problem? These and many other questions provoked an intense debate between the participants, which naturally led to a discussion about the situation with hate crimes in Albania and treatment of victims of hate crimes.

During the practical part of the workshop, the participants worked on the cases of hate speech and hate crime that were developed by the Online Activists of the No Hate Speech Movement. The cards #22reasonswhy, which were used for the case study, are available here. One of the cases brought up the arson attacks against dwellings inhabited by some 40 Roma families that occurred in Albania in February 2011. Over several days and nights neighbors of the settlement, using weapons, threatened, intimidated and physically attacked members of the Roma families; they also burned down at least two dwellings. Another case invited participants to elaborate on the impact of nationalistic political discourse, tackling the tragic incident in the UK, when Jameel Muhktar and his cousin were acid-burned by a stranger.

“As kids we were growing up with a lot of hatred towards whoever is different without even realizing it – through our jokes, stereotypes of the neighbor and stories of the past. How could we know, if everybody around us thought that that was normal?”

The workshop revealed that activities like this are extremely important in raising awareness among young people about how prejudices can easily evolve into hate speech and even hate crime, and how each one of us is responsible and capable to prevent those.