As many of you remember, in the end of September 2015, “Perspektiva” in partnership with Swiss National Youth Council (SNYC) and “PVN Albania” organized a training course “Youth Transforming Conflict Online & Offline.” This course was organized in the framework of the East Project Cooperation Meeting  – SNYC programme to support youth civil society initiatives for sustainable development in the Western Balkans and Moldova.

The training gathered together young people from Albania, Bosnia & Herzegovina, Kosovo, Serbia, Macedonia, Montenegro, Moldova and Switzerland. Apart from learning about conflict transformation, peace-building and combating hate speech online and offline, participants were supposed to establish the next steps for joint projects. It was inspiring to see active youth from all Western Balkans, who are able to build friendships and mutual understanding disregard borders, history and politics. In fact, it led to an idea of creation a network that will gather these people, their organizations and many more together to strengthen the impact of youth activities, to build partnerships for joint projects and to advocate for better development of youth policies around Balkans – as it was obvious that challenges that young people face in these countries are all the same. “Balkan Club” gained its name in an isolated village of Vaqarr, where first part of the course was organized, and was shaped during one long evening in Durres.

Now it seems unbelievable that just a few months later – on 12-14th February 2016 – the first Balkan Club Conference gathered already 40 participants from the project countries, representing more than 30 civil society organizations and youth networks. Indeed, it takes golden hands to make a good idea reality – and the Balkan Club found its devoted “father” in one of the participants of the training course in Albania – Aleksandar Brzakovic. The idea of the conference was shaped in consultations with Sophie Neuhaus from SNYC, group mates and Center for Civil Resources Development, who eventually hosted the activity. 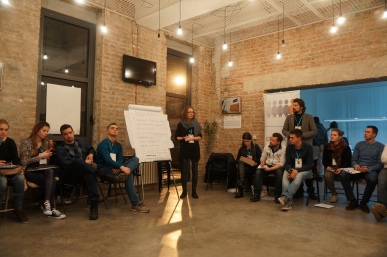 During three days of the conference, participants decided about the shared objectives of the Balkan Club as an informal network for the youth NGOs from the Western Balkans and Moldova, shaped cooperation mechanisms and signed the act of the Balkan Club establishment. Clearly, these are just the very first steps in, hopefully, many years of successful cooperation in the region and beyond. Nevertheless, it is encouraging to see young people across the Balkans, who could serve such a good example for politicians just because they see beyond the ethnic borders and are eager to compromise and act in mutual interests. It is even more encouraging to be a part of the Balkan Club – just a week after the conference, we are already actively engaged in the networking for some interesting youth developments later this year.

This site uses Akismet to reduce spam. Learn how your comment data is processed.